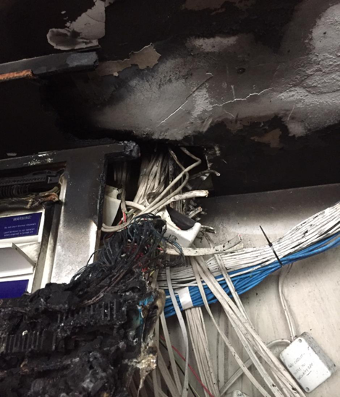 A fire occurred in early 2019 in a Strata complex in Perth. The fire was contained to one apartment unit on the upper floor of the multilevel Strata complex.

The Insurer appointed a builder to assess the damage to the apartment and prepare a quotation for repairs listing the works to be undertaken at under $200,000.

Upon receipt of the repair quotation, the client was concerned that the damage was more extensive than that allowed for. The client’s broker referred them to YourClaim to assist with the preparation of their claim and the client.

Following our inspection of the property, it was clear that the client’s concerns were warranted. In consultation with the appointed loss adjuster and the Insurer, we agreed that an engineer would be appointed to prepare a detailed scope of works (“SOW”) to identify actual damage to the property.

We attended the initial site inspection with the engineer, loss adjuster and the client to ensure that all areas of concern were highlighted.

Following multiple site visits and discussions with the engineer, a scope of works was prepared that identified significant damage and repairs required to the property that dwarfed the initial assessment undertaken.

The bulk of the additional damage related to water and soot damage to multiple surfaces at the property that were previously omitted. Insurers agreed to include some of the additional works identified but resisted others.

It was necessary to the engage specialist hygienists and other expertise to support the Insured’s reinstatement entitlement. Using that information, we prepared and presented a supported claim submission with compelling evidence to demonstrate all damage sustained and the appropriate measure of reinstatement as allowed for by the policy. This included resolving issues around concealed soot and mould in gyprock walls in both the apartment and common areas.

Once the Scope of Works was agreed, this was sent out to tender to determine the repair cost.

Builders were invited to inspect the property given the incredibly complex nature of the repairs to be undertaken. Those repairs included issues around privacy, access and noise to name a few.

A further complication arose following our office identifying that two of the three quotes received by builders were in fact not in accordance with the scope of works.

This was crucial because both those quotations were substantially less than the remaining quote that was compliant.

Insurers proceeded to make an offer of settlement based on the lowest quote of circa $700,000, advising that the reinstatement method proposed by this builder was considered reasonable to return the property to its pre-loss condition.

Our office demonstrated to the Insurer the pitfalls in this quote as well as the other non-complying quote, showing the multiple inadequacies and a failure to fully identify all damage, which the Scope of Works had allowed for.

To progress the claim, it was agreed that the reasonableness of the one compliant quote would be assessed together with assistance from a quantity surveyor. After multiple exchanges with the Insurer, the claim was eventually agreed and settled in excess of $1 million.

This represented a settlement of at least 5 times that of the original repair allowance which was clearly inadequate and not representative of the cost of reinstatement as allowed for by the policy.

In addition to the repair costs, we also presented and recovered for the apartment owner all temporary accommodation expenses Strata Levies paid until such time as the repairs were completed.

The Insured also had cover for claims preparation costs under their policy and we were successful in recovering all expenses incurred by our office to assist the client with the preparation of their claim.

The claim was eventually settled on a cash basis to reinstate the property back to an “as was” condition in excess of $1 million. This allowed the Insured to make changes to the property and reinstate in a manner suitable to their requirements and still within the same time period to repair “as was”, thereby not leaving them out of pocket on temporary accommodation or Strata Levies.

It is important to never underestimate the value of having a claim properly prepared and presented by a specialist who has an in depth knowledge of how the policy responds and how the claim should be presented in line with the policy requirements to achieve the actual entitlement for the client.

Loss at a Growing Manufacturer